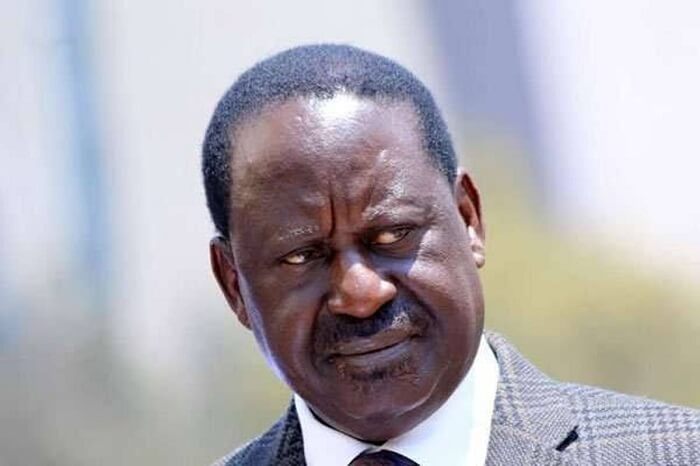 For starters, before we get to the theme and content of this missive, let me remind you that before you utter “Ruto Must Go,” we should be reading about you in the history books or in the archives section of media houses libraries.

Sir, to paraphrase the seminal 1653 address by Oliver Cromwell to the English parliament – you have overstayed in our political space for far too long than it is good for this country. In the name of God, go!

You may be celebrated by some as a fighter for freedom and an icon of democracy, but to others, you are a manipulative political fraud. I am tempted to sympathize with the latter’s school of thought.

From suspect educational background shrouded in mystery to being adversely mentioned in 1982 attempted putsch to topple retired President Moi’s government, your life has been less than a clear open book. Much is conveniently hidden.

As a leader who has aspired for high office, your history is replete with shady deals, hidden behind the facade of a patriot. We can not claim that you love this country less, but you love money and power more.

Despite carrying yourself as the paragon of virtue and moral probity, your political journey is marked by an unbridled craving for power, money, and fame.

You lack the moral rectitude to call out on anyone about corruption. Your public anti-corruption credentials are a creative veneer designed to hide the real man beneath. The man is the corruption itself

Being involved in a coup de tat is not only an act of treason but the most diabolical form of corruption one can think of in the pursuit of political power.

Much as the detention without trial under the Moi administration, may appear as a badge of honor to you, history will most likely vindicate the retired President as having been lenient and tolerant of a vile criminal, but harsh on him for, in your stead, putting to the gallows, your hapless surrogates.

We all know the post-1997 general elections KANU – NDP “kopareson” and “maja” had nothing to do with democratic ideals. Moi and his fixer Mark Too aka Mr. Dawa, knew you too well. The original handcheque did the wonders to contain your tantrums. Corruption.

We also know the 2002 “Kibaki Tosha” was self-aggrandizing. It was meant to catapult you into the defacto kingmaker who would be consulted at every turn. You were soon the rebel within making Kibaki’s every waking moment a living hell. Corruption.

In 2007, the man you are now shouting must go was in your corner. When the smelly stuff hit the fan following the PEV due to the disputed elections, in which you were the disputing candidate, you threw him under the bus.

Needless to say, you became the Prime Minister, after the nusu mkate government was cobbled up. Soon you would resume protocol tantrums with the VP Kalonzo Musyoka.

We cannot forget the war of words as to who between VP and PM was upper the other in the political pecking order, besides the complaints of “mkeka ni nusu na hakuna choo,” and the constant haranguing of the gentlemanly President Mwai Kibaki. Selfishness.

As William Ruto took the bullet for you and got hauled to The Hague, you remained unperturbed, actually fueling the fires by proclaiming the ICC indictees, including your now handshake brother, should rot in the Hague.

A general who does not stand with his troops in their moment of need is not worth his name. No wonder there is no love lost between you and the Deputy President.

It is clear there is sour grapes looking at the fortunes of the man you threw under the Hague bus. In 2013 he teamed up with his Hague co-accused to beat you for the presidency.

Despite your petition, their win was upheld. They repeated the feat in 2017 where you successfully petitioned and conveniently boycotted the repeat which they won.

Pundits still hold the view that the petition and boycott in 2017 was a clever ploy to force another nusu mkate government. Ng’o! Corruption.

And then the March 2018 handshake cometh. The reasons, the deals and the shenanigans behind the handshake remain a matter of public conjecture. There are allegations of a payoff. The jury is still out. Corruption.

However, it is the post handshake wanton corruption and the characters involved that raise more questions than answers. And as they steal they are conveniently shouting thief! thief! We can see the well-choreographed script.

Your Capital Hill offices have now become a butt joke as the laundry where all corrupt politicians are cleansed to “weupe kama pamba.” We are tempted to agree with the “Capital Hill Laundry” description.

When we see your toothy grins and handshakes with an NYS heist suspect and a coterie of corrupt governors kowtowing in your presence for automatic cleansing;

When we hear the suspicious ODM deputy party leader Hassan Joho is an insider on handshake powered cargo contracts on the SGR, which is disguised as a crucial public investment from the Port of Mombasa through the Dry Port in Mûthamakiland and onwards to the Port of Kisumu;

When we hear of your personal and your brother’s interest in the “development” of Kisumu Port, where the goings-on are shrouded with opaqueness, land grab, and inflated pricings;

When we remind ourselves of how your family was gifted the Kisumu Molasses Plant for a song courtesy of the 1997 handshake with retired President Moi, Triton, Kazi Kwa Vijana, the Caroli Omondi Maize Scandal, etc;

And now listening to you pontificating against corruption, castigating the Deputy President over his “unexplained wealth” and church contributions, when will you explain your own billions knowing you have not had any gainful employment over the last decade and your family businesses have been struggling?

On matters of corruption, there is no way we shall ever address historical injustices without putting the Kenyatta’s, the Moi’s and the Odingas on their defense. They are our major problems. The rest are small fly.

Finally, we so well understand the political power games at play. Self-preservation and safeguarding the loot. We are woke and are waiting with the only weapon at our disposal. The vote.