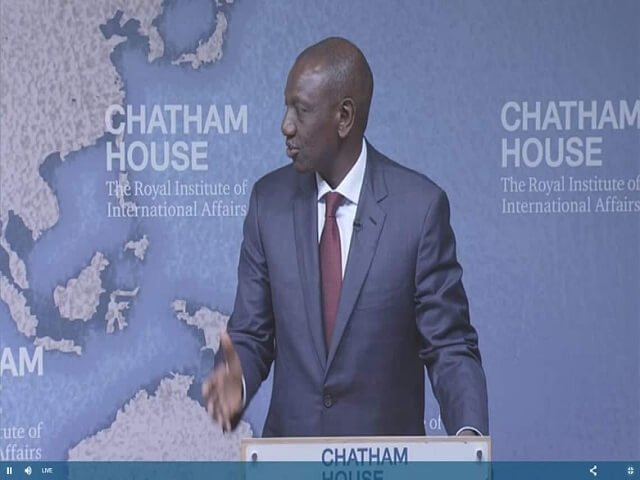 Ruto’s Solution To The “Winner Takes All” Problem

Deputy President, William Ruto was in the UK, where he gave a lecture at Chatham House among other things. Speaking on Kenya’s National Unity and Regional Integration: Challenges of Inclusion, Growth, and Change, Dr. Ruto gave what he considers the best way to handle the “winner takes it all” problem.

There is a feeling among certain Kenyans that the current executive is not as inclusive. To address that, some are advocating for an expanded Executive. Positions of Prime Minister and two Deputies are among the proposals on the table. Dr. Ruto, however, disagrees with this proposal on the basis that it will still leave the opposition in the cold.

On the suggestion that the runners-up becomes part of the executive, the DP felt that would render competitive democratic elections useless.

Dr. Ruto proposed the following to mitigate the winner takes all feeling:

On whether we have the constitutional moment to prosecute the proposal now, Ruto left it to Kenyans to decide. To choose between going for the changes now or waiting until we are sure we’ve sufficiently tested the law as it exists.

Regarding the ability of IEBC to conduct reliable elections, the DP said the problem was not mainly with the IEBC but with people who can’t concede defeat. He argued that those who go into democratic elections expecting only to win were the biggest threat. To fix this, Ruto suggested we only allow democrats to participate in elections moving forward.

Kenya Vs Somalia: What’s The Diplomatic Row About?