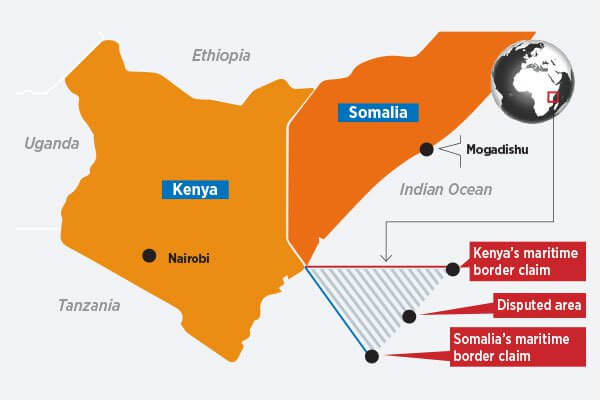 Kenya Vs Somalia: What’s The Diplomatic Row About?

Kenya vs Somalia diplomatic row has erupted. It’s bad that Kenya has recalled her Ambassador to Somalia. This is to protest what she considers an act of aggression by her neighbor. What’s going on? Well, officially…

The diplomatic row stems from the decision by Somalia to auction part of what Kenya considers her maritime territory. Kenya insists Somalia acted in bad faith. And coming from a neighbor she’s been nothing but kind to, Kenya feels betrayed.

The picture above shows the genesis of the dispute between the two countries. Each country has what she believes is the official territorial boundary. Somalia went ahead to sell what Kenya lays claim to. This move has angered Kenya hence the termination of diplomatic ties.

A disputed territory with oil and gas could see the relationship between the two countries strained even more.

Kenya vs Somalia row is a tricky considering millions of Somalis live in Kenya. On the other hand, Kenya Defense Forces are currently in Somalia. Kenya also hosts the largest number of Somali refugees while there are Kenyan citizens living and working in Somalia.

It is one difference that requires diplomatic resolution otherwise there is a lot to lose if Kenya vs Somalia row gets out of hand.