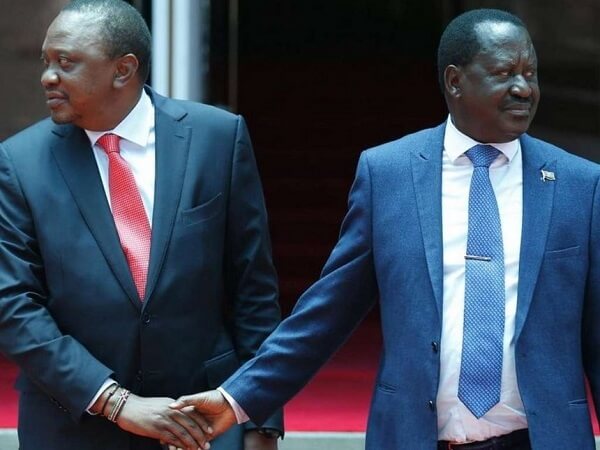 The Uhuru-Raila handshake is arguably the most trending political topic in Kenya today. To some, the handshake was the single most important act of patriotism and statesmanship since independence. Others, however, believe it was the most brazen act of betrayal in the political history of our great Nation.

Background of the handshake

Allow me to skip the heated campaigns, the nullified elections, the repeat polls, the noise, and the fake oaths. It was too much drama to capture under a subheading. If anything, I covered much of it in my previous letters (i.e. letter to the president and one to my brothers and sisters). The long and short of the handshake is that Uhuru came to the rescue of Raila

After the fake oath and the betrayal of the other NASA Principals, Raila was struggling to remain afloat politically. His ‘soldiers’ were tired and the principals were firing from all corners. To put it mildly, Agwambo was nose-diving into political oblivion when Uhuru intervened.

On March 9, 2018, Kenyans watched with surprise (pleasant or otherwise) as Uhuru and Raila read a joint statement ostensibly putting an end to of division and the attendant ills. This was to give room for development and unity.

Who called who, the concessions, and promises made etc remain matters of speculation to date (several months later). The duo, however, listed nine (9) things that we had to and still must address to live happily ever after.

Issues the handshake was to address

The President and the Leader of Opposition (then) didn’t stop at swearing to work together as brothers; they formed the Building Bridges Initiative. The committee to look into:

You can read more about the issues at The Presidency Website. The Building Bridges Initiative will table recommendations on the issues.

Was the Handshake necessary?

‘Sam, what’s your take on the handshake; do you support or oppose it?’ is a question I face almost daily. Well, I can’t say whether the handshake was a patriotic or a selfish move with some finality. As the president once said, only understand the details of the handshake.

Be that as it may, I strongly suspect the recommendations we are paying millions for are gathering dust in the pages of Ndugu, TJRC, Waki Reports etc. If you asked me, the Kriegler Report had the cure for our electoral challenges.

While I don’t see sense in spending hundreds of millions to get what we already have, the handshake was necessary. True, NASA was dead and the other principals were ganging against Raila. But you couldn’t rule out the possibility of Baba tribal supporters returning to the streets to die for their beloved leader.

Thanks to the handshake, it was impossible to send more Luo youth to die for selfish reasons. And by giving Baba a slice o government thdness stopped.

Did the handshake bring peace?

Albert Einstein once said, “Peace is not merely the absence of war but the presence of justice, of law, of order —in short, of government.” Raila supporters still call him president which defies . They only recognize the government as long as Raila tells them to not because it is the right thing to do.

What we have is not peace but calm. Is the calm good? Oh yes, it is. Tuju is a hero in Siaya, Raila is a celebrity among former critics and Ouru is the darling of Luos. Above all, we can visit wherever we want and do business without fear. So, while peace is still elusive, we can make do with the calm in the meantime.

Attempts to clothe the attacks as “the war against corruption” have only helped to expose the real intention. And, with senior supporters of handshake coming out to sing Ruto will never be president, it is apparent political unity is not part of the deal. In my view, the Uhuru-Raila handshake may be about creating news alliances even if it means destroying the ones.

The reality is that the new object of hate has millions of supporters. Attacking the leader day and night make supporters feel like targets and not part of the handshake. Unless somethings change, we may end up more divided than before

Going by the number of times we’ve amended the electoral laws to accomodate Hon. Raila’s interests, I have no otherwise but to join those who believe ‘electoral justice’ means ‘Raila winning the election’.

Lest you forget, we almost every electoral law to meet Raila’s demand in the days leading to 2017 elections. From changing IEBC leadership to the election act to endless court rulings, the country did everything to level the playing field according to Baba’s wishes. By Raila’s own admission, he’d SEALED ALL THE ELECTORAL LOOPHOLES.

So, unless we enjoy mutilating our laws now and then to soothe political egos, spending millions to guarantee electoral justice, is taking a sad joke too far. Or maybe the rumours of ‘special positions’ to the winner shares it all with the loser are true. Otherwise, the handshake won’t deliver Raila’s version of electoral justice.

The handshake deserves our support because no youth is dying in pursuit of an individual’s selfish interest anymore. However, let’s not raise our hopes past the ‘situational calm’ we currently enjoy. Let’s accept that we have enough money to waste on redundant bodies like Building Bridges Initiative to provide recommendations we may have already.

Finally, there will never be unity of purpose as long as we build bridges while burning some. We wont go past arrests and ‘dropping charges’ when we trivialize important things like the war on graft. If the formula is wrong, how do you expect the answer to be right?