I know now is not the best time to write anything positive about Jubilee Government, let alone President Uhuru Kenyatta’s role in fighting corruption. According to the ‘Public Court’ (whose trials are done on TV, Radios, Newspapers and social media), Uhuru is too incompetent to lead and annoyingly corrupt. And it’s not just the opposition shouting ‘crucify him’ this time; some of Uhuru’s supporters have ‘seen the light’ and now doubt the president’s ability to fight graft. From what have heard, they are waiting to vote Uhuru out of office at the earliest convenience.

Why the sudden anger? Well, the president ‘hurt’ the opposition by claiming that no administration has done more to fight corruption than his. Some of the president’s supporters, on the other hand, didn’t like the ‘mnataka nifanye nini?‘ question. Watch the video for more.

To make matters worse, an Interim Audit Report (leaked to Nation Media’s Business Daily) pointed to loss of over 5bn at the Ministry of Health. The #AfyaHouseScandal, in a way, justified opposition’s anger and Uhuru supporters’ disillusionment.

So, why write when the verdict is already out there? Why become the devil’s advocate when political correctness demands otherwise? Do I know better than the public court? Well, ladies and gentlemen, I have no faith in the public court. I also can’t just ignore President Uhuru’s role in the war against corruption in Kenya. Suffice to say, circumstantial evidence points to a well choreographed political onslaught against Jubilee (thinly veiled as an anti-corruption campaign). Let me begin with Uhuru’s contribution to the war against corruption…

When taking a list of 175 people to parliament and sending home up to a third of government officials didn’t work, President Kenyatta came up with another plan to fight graft. He directed and recommended the following:

The Code cut over-quoting during tendering and procurement. It also has provisions to punish non-compliance by disqualifying such companies and their directors from doing business with government. And that’s not all, it even delists fraudulent firms from all business associations (for not less than 5 years) apart from publicly shaming them.

To discourage public servants from delaying the provision of services to give room for bribery, each department and agency have timelines to deliver certain services to Kenyans. Instead of bribing for quicker services, the government identified such services that can be delivered faster and placed a uniform price-tag on them. It’s useless to pay bribe to get your passport these days, for instance.

The Bribery Bill focuses on the supply side of corruption, on those who give bribes or induce public officials. You and I know that graft involves the giving and taking of bribes…that’s what this bill handles. And it’s not some proposal, it was quickly approved by the cabinet, tabled in parliament, passed and assented to by president. A law to punish the briber and not just the bribed was overdue. Find it here

We all know that our money is looted then stashed in secret accounts overseas. Getting the funds has never been easy. Uhuru’s government signed agreements with a number of countries to make it possible to identify and deal, in their jurisdictions, with illicit wealth acquired in Kenya. This is the easiest way to get our money back. If you didn’t know, the success of war on graft is measured by the amount and assets recovered and not the number of thieves who stepped aside.

Even reporting a match-stick thief was near impossible in Kenya. At best the police would (without doubt) tell on you. At worst you will be the one going to jail on alien charges. A legislation that ensure that those who come forward with information on corrupt practices are protected is already passed. The Access to Information Bill assures Kenyans that they can report corruption without ending up dead in the process.

I’m no banker, but the looters use our banks to launder the proceeds of theft and fraud. With the operationalization of the Financial Reporting Center, any bank that engages in money laundering can be identified and deregistered. This is what has helped the government to freeze the accounts involved in the NYS saga as well as recover some assets.

Days when a clearing and forwarding officer was richer than Bill Gates are over. Uhuru directed the reviewing of the legal and institutional framework on Customs and Border Protection. This was to ensure that all the staff working at the Kenya Revenue Authority, the Customs and Immigration departments undergo integrity and competency vetting by an independent multi agency vetting mechanism. Call it preventing graft by employing clean people

Part of the Financial Reporting Center, Asset Recovery Agency helps in reclaiming assets. It is what Kenyans need..not the ‘stepping aside’ joke. We want our lost funds back just as we want the corrupt out of office and in lock-up. That agency is now operational under president Kenyatta.

Kenya must move budgets from being vendor driven. That is, separating the planners and budgeters…from the implementors and spenders by allowing the Presidency to produce a President’s Budget working with the Parliamentary Budget Office. It not only made the president more accountable but also helped him drive priorities, oversight and reduce influence peddling in budgeting, while ministries and departments concentrate on implementation and service delivery.

Let’s now move to why I have no faith in the “public court” and why I believe the war on graft has been politicized. In other words, to explain why I’m too reluctant to buy into the ‘Uhuruto are looting this country dry‘ chant.

Politicization of war on graft

From the outset, you would think Kenyans really hate corruption. But given the opportunity to be corrupt, only a few will give up the chance. The rest will bribe their ways into jobs, schools, promotions etc. Very few Kenyans will miss an opportunity to bribe the police. Simply put, even the citizenry is too corrupt it’s ridiculous to hear them sing anti-graft songs. As they say, he who comes into equity must come with clean hands…sadly most Kenyans don’t have ‘clean hands’. 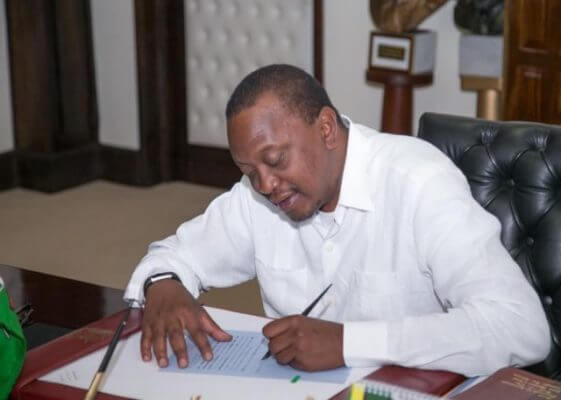 But let’s assume we had the moral ground to accuse others of corruption, are we going about it the right way? Is singing against corruption when it touches on our political opponents and going mute when our own is mentioned the right way? When member of the opposition militantly defend their leaders against graft allegations but quick to demand the jailing of those accused from the government’s side…how genuine is that? It’s what I call taking a sad joke too far.

Let’s say the public wasn’t biased, what about our media? Do they report verified facts or peddle low-level rumors? How many times have you read a sensational headline only to read an apology about the same the following day? When the media is interested on sales than faithfully informing the public, professionalism is frowned upon. Which explains why an unverified internal audit reports are serialized as if they were gospel truth. And thanks to the media, the public court has rejected Ministry of Health Clarification as a lie. It’s that bad.

On internal saboteurs, is it standard procedure that a government auditor should leak an incomplete audit report to the media before it’s finalized and submitted to the relevant department? Is it normal that sworn affidavits should reach the press before they reach the courts? I don’t think so.

Have you forgotten how PS Mangiti presented to a false report to parliamentary committee (which leaked it to the media) only to withdraw it later? The damage had been done and the Public Court had believed that a single pen costs 8000/- in Kenya. What about Agnes Odhiambo (Controller of Budget) who sensationally claimed that 53bn of the Eurobond Loan couldn’t be accounted for only for her to say she was wrong? Knowing too well the media had had their chance to amplify the error as an evidence that Eurobond was lost.

As long as we politicize the war on corruption, we’ll always be matching backwards. As long as the media is interested in the ‘story’ and not the facts…the war on graft will always be a mirage. Unless we change tact, we’ll always be doomed. See why we have failed in the war against graft to get the whole picture. Understanding our past failures is important because ‘those who don’t study history are condemned to repeat it‘.