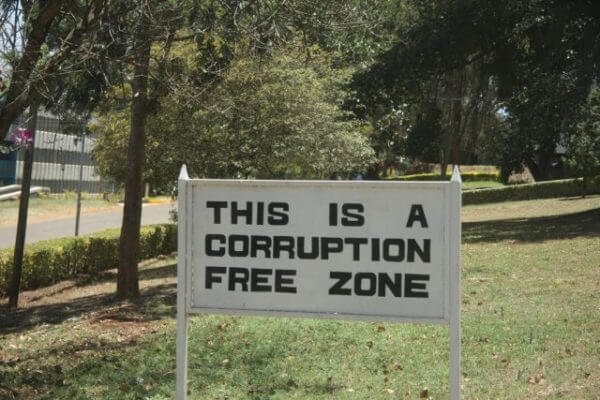 Corruption In Kenya: Effects And How To Fight It

Corruption in Kenya is, admittedly, the reason behind all our economic woes. Most of us, if not all, agree that the sky would be our limit if the government did something about corruption. In this post, I’ll share what corruption has turned us into, why the war against graft has achieved very little success and what I believe is the best way to fight graft moving forward.

Corruption is dishonest behavior by those in positions of power, such as managers or government officials. Corruption can include giving or accepting bribes or inappropriate gifts, double-dealing, under-the-table transactions, manipulating elections, diverting funds, laundering money and defrauding investors ~ Investopedia

I love the definition from Investopedia because it doesn’t at the meaning but illustrates corruption too. But corruption is such a wide term that the above illustration can’t even begin to scratch the surface. Let’s look at the types of corruption for more insight.

According to Transparency International, there exist three classes of corruption i.e. grand, petty and political depending on the amounts of money lost and the sectors involved. In brief:

From the above definition and classification, we can say corruption is the oppression of the weak by the strong. The question we must answer then, is who has the moral grounds to condemn corruption in Kenya? I mean, the rule of the thumb has been that “he who comes to equity must come with clean hands”. Let me try to paint the grim picture of the state of corruption in our country; to dissuade you from pointing fingers at others while forgetting your culpability.

We live in a country where the love for hypocrisy reigns supreme. It’s not strange to receive lectures against corruption from the corrupt. You’d be taught about honesty by people who cheat for a living. The ugly truth is that millions of Kenyans actually love corruption more than eternal life (when it favors them) but pretend to hate it more than cancer (when they don’t gain from it).

By government I mean the Executive, Parliament, Judiciary and all Civil Servants. If you crashlanded in Kenya today, you’d think the only reason we fought for independence was to propagate corruption. Regime after regime, Kenyans have been treated to shameless looting by the same leaders they elect to change lives.

Before you remind me of how I campaigned and voted (twice) for a corrupt regime, let me state here that Uhuruto’s is the only regime that has done something visible to fight corruption (read the steps Uhuruto took to fight corruption). I’m not saying the current regime shouldn’t go above and beyond to fight corruption, they have no choice but to (they owe as much).

From the executive to local politicians, people have acted as if they were elected or appointed to amass wealth. And there is nothing wrong with amassing wealth, but siphoning money meant to improve lives to offshore accounts is not the way to go about it. It’s sad that 50+ years after independence, our leaders still embrace the “it is our time to eat” motto. But wait, from where do these leaders come?

The problem with most of us (and one of the main reasons I believe we are yet to make significant strides in the war against corruption in Kenya) is reacting to the symptoms instead of diagnosing the cause(s). We act shocked if not enraged by screaming headlines of graft in this or that sector (which might have been written by a journalist who bribed their way into the job and paid by a cartel to put up the story). We react as if corruption is something we loathe so much yet the truth speaks to the contrary. Correct me if I’m wrong, but…

I could go on and on giving instances of duplicity. The fact is that most of us are corrupt and if the society is rotten, the leaders they elect will be rotten as well. So, if there are people who can make a significant contribution to the war against corruption in Kenya, it is us. As they say…

If a country is to be corruption free and become a nation of beautiful minds, I strongly feel there are three key societal members who can make a difference. They are the father, the mother and the teacher. ~ A.P.J Abdul Kalam

The men and women shamelessly looting our billions do so because they weren’t trained against corruption by the society.

That we are corrupt doesn’t mean we’ve not tried to fight the vice. We have screamed against and fought graft albeit using the wrong approach. By the wrong approach, I’m inferring that we love the escapists the government is not committed to fighting graft line while ignoring our own involvement in its promotion thereof. This approach only serves to absolve and turns corrupt men and women into helplessly bitter victims.

The mistake we did as a people was starting the anti-corruption songs before undergoing an attitudinal change. Since then, Kenyans have had to publicly oppose what they practice in private. This is why we’ve made little to no progress in our war against graft.

Perhaps going through our past attempts at fighting graft will underscore the fact that our hypocritical approach is doomed to fail.

Hundreds of billions stolen, suspects were arraigned in court but you know we didn’t convict a fly or recover a penny. Forget that an inquiry into the scandal cost us over 300 million (in a country where over 40% can’t afford 3 square meals a day). We failed pitifully…and why? There was no political goodwill from those in power and the citizenry care more about the entertaining legal presentations than the recovery of the loot. It was an all expensive show, only that money came from our empty pockets.

We lost tens of billions and the public wouldn’t rest until the culprits were shown the door. Well, they were shown the door, the cases didn’t even pick and the ‘culprits’ are still in leadership. We even had to pay 1.4 billion to an Anglo-leasing firm to get our Eurobond approved with the promise (by none other than the president) that culprits would be brought to book and our money recovered. That never happened. Why? lack of goodwill from the agencies in charge of fighting corruption in Kenya and or the president not pushing hard enough.

3. The Grand Regency and Safaricom Scandals

The Grand Regency was sold and Safaricom shares floated amid public outrage. People insisted Amos Kimunya had to go and so he went…briefly. Did we recover the hotel? No! It is Laico Regency, owned by Libyans. What about finding the owner of the mysterious Mobitelea (which owned 5% of Safaricom before selling the shares)? We know nothing about it to date, the shares were sold and bought by the very people who opposed the Initial IPO.

The government decided to avail subsidized maize to the poor after the unfortunate post-election violence. It was supposed to be cheaper and distributed in Nairobi’s slums. Long story short, the maize disappeared! Followed by political finger-pointing. As expected, politicians fixed each other and that was all. We didn’t recover our Maize, the suspects are our political heroes today.

Kazi Kwa Vijana (a program Similar to NYS Empowerment Program but paying a little less) also failed. The Office of the Prime Minister was in charge. Fast forward, no one was arrested, no one took political responsibility and no money was recovered! The project died and we are lucky to be taught how to fight corruption by people who couldn’t fight it then.

Kenya had lost about a billion in Tokyo alone. Again, Kenyans went for the holder of the office, one Moses Wetangula. He stepped aside for a while only to be ‘cleared’ and returned back to government. Today, he speaks against graft with so much passion. Did we get our money back? No. Our money was lost and the public has moved on as expected.

Ann Waiguru was accused of looting the ministry of devolution dry. She denied direct involvement and declared herself the whistle-blower. But the opposition and the media would hear none of it. They tried her on public rallies and media houses. I mean, they insulted Waiguru into resignation.

Fast forward, Waiguru is the Governor of Kirinyaga. Question, what happened to the ‘evidence’ her accusers had against her? And why did the noise stop? Well, some noise-makers were part of the heist and the public that was baying for her blood were simply playing politics, otherwise, why elect her to the office of governor?

We go into a sacred war with unholy objectives and expect better results. Hopeless! The so-called war against corruption in Kenya is at best a cover-up or a tool to settle political scores. Should we give up, therefore? I don’t think so…

No house can stand longer on a weak foundation they say. Our war against corruption must proceed with an attitudinal change. Kenyans must start by hating corrution. But you ask, how can I hate what I’ve loved all along? It’s not easy but very possible.

Why don’t we start by understanding the effects of corruption on our economy and general growth as a nation? From empty drug shelves in public hospitals (leading to hundreds of preventable deaths daily) to overcrowded matatus (taking lives), corruption is the one thing we must all start hating. For instance,

The secret to fighting graft is putting oneself in the shoes of his/her victims and gauging whether the consequences of their corrupt activities are acceptable if they were the victims.

If we could all be partriotic enough, the war against corruption could have been won ages ago. Patriots don’t loot their country.

If we could all be less selfish, Kenya would be manufacturing their own planes not weeping about corruption. This the one war that we must win. Feel free to share other ways you believe will help us successfully fight corruption in Kenya.

Why Kikuyus Will Vote For Both Raila And Ruto