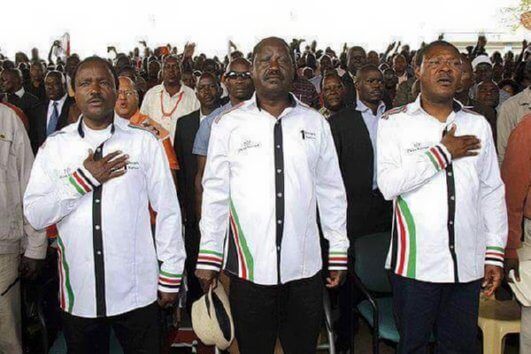 5 Reasons Why CORD Has Failed So Far

Samson Ogola
0 views
6 min read
26
Shares
ShareTweetJoin
In her book the ‘Brushstrokes of a Gadfly’, E.A. Bucchianeri says ‘an acquaintance merely enjoys your company, a fair-weather companion flatters when all is well, a true friend has your best interests at heart and the pluck to tell you what you need to hear’. I’m writing this post as that true friend…the one with the audacity to warn CORD (or what’s left of it) that sanity prohibits doing things the same way expecting different results. We’ll look into why CORD failed from day one.
Saying that CORD is a failed outfit may not go down well with you, I know. But if I don’t tell you the ugly truth, who will? You are already saying I’m too much on CORD. Well, I didn’t ask them to parade as the alternative. So, wont stop interrogating their methods and intentions to see if they really are the alternative government. Why has CORD failed?
1. Wrong Name And Campaign Agenda
CORD (Coalition for Reforms And Democracy) was formed long after we became a democracy and after Kenyans gave themselves a new constitution guaranteeing all the reforms. At the time of it\s formation, there were constitutional bodies in place to ensure the full implementation of the constitution and protect our democracy. With all that, an activists political party was irrelevant at most. You doubt me? Take a look at CORD and the things they had to do to remain relevant.


That CORD resulted from desperation aside, what was their campaign agenda? I didn’t see CORD promote their 10-point manifesto. All I heard from their rallies was a thinly veiled 41 vs 1 dirge. I only saw a gathering of Kenyans who didn’t want anything to do with a Kikuyu president. From incessant claims that Kenya can’t be ruled by one tribe, alarmist pronouncements against the government in their numerous rallies to the anti-Kikuyu social media jihadists…do you still doubt CORD had and still has nothing for Kenyans except to stop another Kikuyu from ascending to power?
2. CORD’s Composition doesn’t inspire.
The Coalition For Reforms And Democracy is led by Raila (a self-proclaimed father of democracy/good governance). Forget that his supporters don’t tolerate divergent views and his backyard is arguably the least developed and now the worst governed. There is then Kalonzo (a man who for political expediency legitimized Kibaki’s government even if that meant the deaths of 1300 Kenyans). You also have Wetangula (who had to bribe voters to be a senator and yet to tell us how we lost over a billion in scandalous dealings in Kenya’s Missions Abroad). You are looking at a cocktail of people who feel Kenyans owe them but with nothing to offer.
They protect the corrupt if they happen to be their own (read Ngilu during the Coalition Government). Stand in solidarity with hate mongers and insolent leaders and still expect us to believe they have a toolbox to fix Kenya. I don’t know about you, but CORD leadership is the last place to look for inspiration.
3. Operating Without A strategy
Even if you dispute the first 2 reasons, what is the Coalition’s strategy? It is obvious they want to form a government, but ours is a democracy and one must look for strategies to win the elections. What do we have here? A team reacting to Kenya’s misfortunes; trying to extract political capital from teachers strike, chilling terror attacks, land grabbing incidences and economy-melting scandals?Could this be a strategy? What about the impatience that makes CORD unable to see a single initiate through?

For instance, after ODM shamelessly and arrogantly showed the world how much they are allergic to democracy at Kasarani, CORD’s leader went to US only to return with outrageous demands. The coalition demanded a compulsory dialogue with the government or else Kenya was never to be the same again. That failed and after spending months polarizing and inciting Kenyans, the outfit launched Okoa Kenya Initiative on Saba Saba.
Do you remember operation Ruto  must go, Waiguru must go campaigns, the sugar rallies, teachers solidarity account, Uhuru Impeachment motion? Before we could breathe the same CORD turned to [team Ruto is clean’ with volunteer witnesses. There are many ridiculous agitations this team is credited for but which never came to fruition. The only thing CORD knows is how desperate they are for power with no plans to get it. No wonder they radicalize their supporters with outrageous claims of how elections have already rigged and why they must fight come 2017.
4. Arrogance/Intolerance
Arrogance is a naturally occurring element in CORD. From Ford Kenya to ODM, it is either the party leader’s way or the highway. People who would be warming up to CORD are put off by tough-talking minions. People who tell you they’ll be in power by all means..they who threaten to correct ‘anomalies’ once they form government. The Jaluo Oksechi ( Luos don’t beg) group who call Kalenjins fools yet in a twisted way expect them to join CORD and vote Raila. The ones who post against Kikuyus from dusk to dawn yet claim to have a toolbox to unite the country. Appealing to the egos of the same crowd every year and thinking you’ll win elections is insanity if you asked me.
6. Disorganization/Incompetence
While everyone knows that there is strength in organization, CORD constituent parties do not want anything to do with civility. If ODM isn’t holding murderous grassroot elections to mint money from the poor lot, they are kicking ballot boxes at Kasarani to end up with appointed national leaders. Bush activists are the heroes in CORD. ODM leaders would rather outdo each other at funerals in their strongholds than to look for new supporters.
Wiper, on the other hand, is so inactive you would suspect it was swallowed by ODM…Except when they hold those press conferences announcing Kalonzo’s candidature and warning Governor Mutua and other wiper rebels, this Wiper thing don’t exist. Sorry..I’m told they are ‘awake and in the campaign mode’. I wished I had something to write about Ford Kenya and their embattled leader.
I wouldn’t waste your time telling you how failed CORD’s marketing strategies are. Just know this, Raila’s YouTube channel was updated more than several months ago, after 2 years of inactivity. Does Wiper and Ford Kenya even have websites? Anyway, I’m kidding…Wiper has a website that was last update in 10 months ago..may be the day it was launched. Ford Kenya is online too with a site updating how Weta will ‘extensively’ tour Butula to popularize the party. If that’s not a dry joke then let’s settle for mediocrity.
The incompetence in the coalition is too much it wouldn’t achieve a lot let alone appeal to non-members. I may be wrong but just take a look at how they have strayed away from their manifesto and you will agree the group has no future!