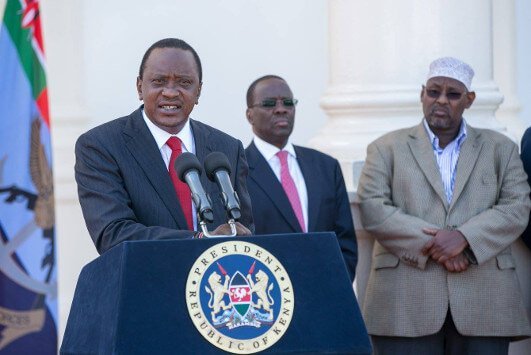 Just For The Record: Uhuru Is Making A Difference

Kenya has two categories of politicians; the ones who want to make a difference and those who want to make a difference. Did you spot the difference?  You may not have but believe me, there is a big dissimilarity. You see, the first group wants to implement what they promised Kenyans in their manifesto and election pledges. They may be fumbling and messing here and there, but one thing is evident; they are unwavering in their commitment to fulfilling their pledges to voters.

They want to change the lives of Kenyans and make a difference. On the other hand are they who trot the globe, run from one Public Baraza to the next Political Funeral Service to criticise the first group. They claim it is their work and duty to stand on every rooftop and tall tree to dismiss the efforts of the former.

To them, group A has no capacity to deliver substantial development and are only engaged in public relation ploys that will never change lives in the foreseeable future.   As far as the group B is concerned, they are the best government that never was. So, how do they make a difference? Oh, they do. In fact, and going by the number of Kenyans who cannot survive without political grandiloquence, theatrics and gimmicks, the group B political group is a necessary evil.

Anyway, I’m not the guy who gets swayed easily nor is it possible that I could buy into public relation stunts. Again, I’m among the most prejudiced against Jubilee and always treat them with unmatched suspicion. Uhuru and Ruto, just like their friends in the CORD depended heavily on tribalism, incitement and unprintable lies to get elected (I believe they won the elections nice and easy).

Back to my reservations…What about their ‘face-of-Kenya’ cabinet? Which goggles do I need to see the Kenya in that predominately Kalenjin and Kikuyu union in the name of cabinet? If you asked me, these two men (the President and his Deputy) are also guilty of unnecessary political stunts.

I’m yet to understand why Parliament had to convene just to make Ruto an acting president for 48hrs. What about Uhuru returning from handling a personal issue at the Hague and going ahead to treat us to another  ‘Baba While You Were Away’ gobbledygook? Anyway that’s beside the point; the rancorous truth is that the said PR exercises and shortcomings can never overshadow their many wonderful initiatives.

I give credit where it is due and the gentlemen at the helm of this country have not failed altogether. You have to give it to these guys, getting in as convicts and presumably devoid of leadership skills yet still coming up with life changing projects isn’t a common phenomenon. Again, service delivery in tragically divided country like ours (with No Go Zones for even the president) isn’t easy.

See Also: Why ODM’s Obssesion With Ruto Is Futile

Trust me; a lily-livered president can’t do a thing when our autistic opposition politick from dawn to dusk. I’m referring to the ‘alluta continua group’, the ones who blame every unknown enemy for their woes and triumph in equal measures. Uhuru and Ruto have tried. Here are some of the things the Son of Jomo and Samoei have done and are doing:

I could have continued, but even the few points listed above ably paint a picture of a working government. Now, those hungry for burials, please feel very free to attend. As for me, this PR thing by this President and his Deputy is satiating to say the least.