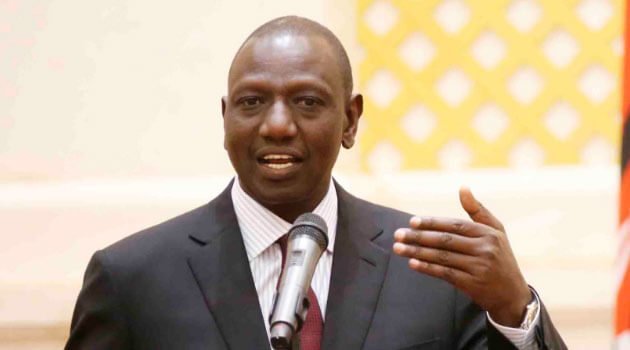 Why ODM’s Obsession With Ruto Is Self-defeating

Martin Luther King once said that ‘Man must evolve for all human conflict a method which rejects revenge, aggression and retaliation. The foundation of such a method is love’. If you asked me, that method is what ODM/CORD lacks when it comes to Ruto.

The truth is, revenge is an unnecessary exercise in futility. It brings misery even in supposed victory and the earlier ODM leaders and supporters accepted that the better. I tell you, their hatred for William Ruto (Deputy President) is one huge futile undertaking.

How it all started

Did you know that ODM is not the only party Ruto, Uhuru and Raila have shared? I mean, the trio were high ranking KANU officials at one time. Then they found common purpose and united against the opposition. Of course, the marriage of convenience wasn’t to last because one Raila believed he was the chosen one to run for the presidency on a KANU ticket only for Moi to slap him with a direct nomination

The Moi (the self-confessed professor of politics) didn’t trust anyone but Uhuru with the leadership of this country. You understand that, while every heavyweight ( longest serving Ministers under Moi) left but William Ruto stuck and supported Uhuru Kenyatta. Who knew they would one day rule this country? Anyway that’s beside the point. We are interest most in the genesis of the apparent hatred for anything William Ruto by ODM.

Just as a footnote, Raila and other long-serving but underperforming ministers joined the already popular opposition under Wamalwa, Kibaki  and Ngilu. Like I said the self-declared father of modern democracy didn’t like Moi’s decision to nominate the Son of Jomo as the KANU flag bearer.

So, a radicalized opposition feasting heavily on the citizen’s disgruntlement and apathy against Moi went ahead and won the 2002 elections.  Moi , Ruto and Uhuru were handed a humiliating defeat. They conceded and Ruto’s loyalty saw him take over as KANU Secretary-General. Those were the days when Raila and Kibaki were the best of buddies. In fact, Kenyans were the most optimistic people in the world. What went wrong?

See Also: Kenya Is Not A Multiparty Democracy

As expected, Kibaki failed to do one important thing i.e. make Raila the Executive Prime Minister of Kenya and the Head of Government. To achieve that, he had to do the impossible. I mean, President Kibaki had to draft a New Constitution introducing parliamentary system of government, take it through the parliamentary processes and pass have it through a referendum within 100 days. Talk of the promises politicians make to get votes.

Raila used that to lead a revolt against Kibaki. He became a pain in the neck, if you know what I mean. The in-house wars saw Kibaki surround himself with tribal cronies to protect power. You cannot blame him, can you? If a ‘friend’ who heaped praises on you a few months ago turned into a merciless foe, what else would you do but to survive?

An even attempt by Kibaki to give them a constitution was thwarted. The Wako Draft was voted down and both Ruto and Uhuru (who wanted to settle scores with Kibaki) were glad to have helped.

The referendum was used to form ODM (Orange Democratic Movement). A political party that like the rest, had nothing unique to offer but to act as a tool to take power. Trust me, ODM’s manifesto was similar to those of KANU under Biwott . In fact, they were no different from the aspirations of Kibaki’s Party of National Unity (PNU).

And who said Kenyan’s cared about political parties in the first place? Ours is the business of hero worship and untamed sycophancy.

Back to Ruto… he was to bring on board the angered Kalenjin whom Kibaki had systematically removed from public service. Samoei didn’t disappoint and delivered the protest vote. They didn’t vote for Raila because of love but because they hated Kibaki.  In Kenya it is ‘the enemy of my enemy is my friend’.

That’s why Kikuyu and Luos were united in 2002 but became rivals in 2003. The same reason Kalenjins and Luos were the best of friends in 2007 but became foes in 2013. The other day, Kambas and Kikuyus were best of buddies but aren’t today. It is a game the political class have perfected so well.

All it takes is setting one tribe against the other and you radicalized your supporters the more. Interestingly, most Kenyans are frustrated that all they want is something or someone to blame or hate. And you think the political class are oblivious of that? Therein lies for them the key to remain in power; exploit the voters’ frustration and feed them hopeless hope.

Ooh., back to Ruto.. Well he became a member of the ODM’s Pentagon (a group of five tribal chiefs and the highest decision-making organ in ODM). Then they went for an election, rejected the result, engaged in tribal violence and then formed a coalition government.

Ruto In The Coalition Government

It is in the coalition government that Ruto’s  tribulations started. The fact that he brought almost everything on the table was moved to the periphery and Raila’s obsession with Luhyas took center stage. He would make Ruto a mere Minister for Agriculture and a ceremonial Second Deputy ODM Party Leader.  Mudavadi (who later betrayed Raila) was the man. He got whatever he wanted. From Deputy Prime Minister to Deputy Party Leader to the running mate, Mudavadi was the real deal.

Don’t forget that it is Ruto’s ‘struggles’ (which would later send him to the ICC) that landed Raila the Premiership on a platter. Ruto would be accused of corruption involving Maize and more. The PM tried to cut Ruto to size and even fired the already wounded Ruto in a deal where Kibaki would reinstate Moses Wetangla.

Alot of water has passed under the political bridge and Wetangula and Kalonzo are now the newest reformers around. Yes, the principals and a feted reformer.

You already know too much, so allow me to go to the part where Ruto joined Uhuru to hand Raila’s one of the most humiliating defeats ever. Fact, Uhuru wouldn’t be president without the support from Rift Valley. ODM too knows that and blames Ruto for their humiliation in 2013.

Nothing pains ODM than the fact that William Ruto is the Deputy President (DP) and a onetime acting Commander-In-Chief of the Armed Forces. Nothing annoys and heartbreaks ODM supporters than the harmony with which Ruto and Uhuru work. ODM has been everything but happy for the DP.

They (ODM supporters) hate Ruto so much that they want him found guilty and jailed by the ICC court. They believe this will annoy the Kalenjins and put then against Uhuru. The man who meant everything to them is now the worst enemy who must be brought down by every means. Ruto is disparaged, ridiculed and every move he makes is taken by a lot of salt by ODMers.

You are not taking the latest political prank from Raila, where he is want to be an ICC witness to save ODM and Ruto, are you? If you do then you are too naive to understand the politics of this country. C’mon, this is the man who said Ruto and Uhuru belonged to jail.

Just to be clear, Raila’s ‘willingness’ after ‘calls from URP’ to testify are mere political gimicks. Sadly that are miscalulations. This is a desparate attempt to save face. Ruto will be out and Raila want to be seen as one who wished the guy well. It is also a clever way to potray the President’s people are selfish and anti-Ruto. That’s all.

Apart from trying to paint Ruto as the most corrupt alien that ever lived, ODM is ready to work with anyone and everyone who goes against Ruto in Rift Valley. Raila who wants Kidero’s ‘dead’ for associating with Uhuru and Ruto, has no problem whatsoever working with Isaac Ruto, Alfred Keter or any other nondescript politician from Kalenjin. Talk of shameless duplicity.

Any ‘rebellion’ real or imagine in Ruto’s United Republican Party (URP) is glad tidings in ODM. The social media is awash with everything negative about Ruto. His son we are told couldn’t even score 250 marks out of the possible 500. When Ruto, out of piety, cries in the church he is called Bill Machozi among other derogative names.

ODM would have us believe that the DP is a degenerate landgrabber. Even when the names of the real grabbers are named, they still believe that is a cover up. The only landgrabber in Kenya is William Ruto, at least according to ODM.

The obsession with William’s downfall has seen Raila and his younglings join a misplaced call for referendum by URP’s Isaac Ruto. Well, the governors’ head-boy has some twisted belief that he has been chosen by the gods to defend devolution. Forget that the Auditor General found listed him among the most corrupt governors.

ODM, who have taken hypocrisy and doublespeak to the next level, has no problem dining with a common thief if it means undermining the DP.  So, they are now a team and Isaac is a celebrity in Siaya. Just like inciters Muthama and Khalwale are the darlings of Luos.

Why ODM’s Hate will backfire

Raila seems to think that he can tame the DP using this Isaac guy. What he fails to understand is that the DP rose to prominence in Rift Valley when the Isaac guy was already established in politics. Another sad fact is that Isaac’s call for referendum, just like CORD’s, will never materialize and if it does, it will nosedive terribly.

Ruto, unlike most politicians, is self-made. He used the Agriculture Ministry to win the hearts of his people by providing free or subsidized fertilizers, banning the import of wheat and increasing the price of milk. All these favoured the farmers who most come from Rift Valley.

The theory that Raila made Ruto is a white lie. The DP demonstrated his grip on the people by leading a campaign against the 2010 Constitution. The Rift rejected the document to the last man. It was so humiliating. Even the Maasai voted for Uhuru just to humiliate Raila.

Again, the DP thrives in confrontational politics. In fact, propaganda is his area of expertise and when called upon, he will put all the small rebels to where they belong. Rift valley will hate Raila even more. Now that Kalonzo will want to vie in 2017/18, and considering that Raila will never allow him to win in a nomination, ODM’s support base will be restricted to Luo Nyanza.

Ooops! Even Luo Nyanza is at the verge of political liberation and ODM or whichever party Raila will be using then won’t enjoy fanatical support. God forbid, but should Luos go the path of South Naynza  vs Central Nyanza the script will be different. Ruto will be the least of his worries then.

One more thing, Ruto may be free from the shackle of ICC soon, which may just make some people collapse and die in ‘unclear circumstance’.

Let me conclude with the words of the great Martin Luther that ‘Darkness cannot drive out darkness only light can’. ODM’s vendetta against Ruto will fail and haunt them in future. My advice, concentrate in putting your house in order then you will be the alternative Kenyans so yearn for.